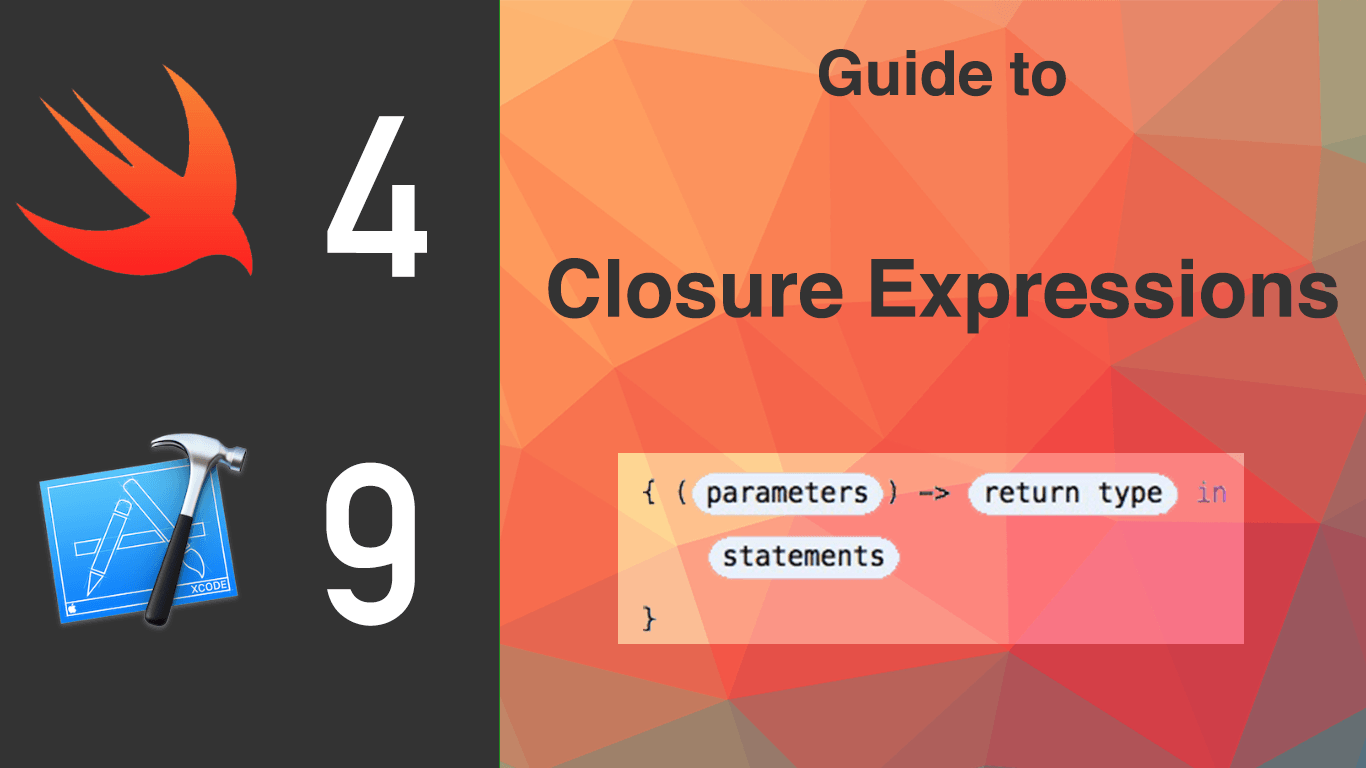 Arguably one of the hardest concepts to grasp in swift is closures. Closures are placeholders for functions. They do the exact same thing as functions but closures are preferred for their speed and unique syntactical sugar.

Closure expressions are unnamed closures written in a lightweight syntax that can capture values from their surrounding context. -Apple

Just a quick recap of the essentials of functions in order to understand closures. This is the syntax of a function:

The head of the functions is made up of the name, parameters and the return type. The statements make up the body of a function.

Functions are first-class citizens, meaning that they behave similar to variables and constants. They can be assigned to var and let just like any value. This means that they have a type. The type is determined by the parameters (only the parameter’s type not the name) and the return type.

In this case, the type of the greeting func is (String) -> String.

Swift’s standard library provides a method called sorted(by:), which sorts an array of values of a known type, based on the output of a sorting closure that you provide. Once it completes the sorting process, the sorted(by:) method returns a new array of the same type and size as the old one, with its elements in the correct sorted order. The original array is not modified by the sorted(by:) method.

The sorted(by:) method accepts a closure that takes two arguments of the same type as the array’s contents, and returns a Bool value to say whether the first value should appear before or after the second value once the values are sorted. The sorting closure needs to return true if the first value should appear before the second value, and false otherwise.

In the following examples, I’ll be using an Array of Strings that will be sorted in reverse alphabetical order. The initial array: let names = ["Chris", "Alex", "Ewa", "Barry", "Daniella"] The method will take a function of type (String, String) -> Bool.

Standard way to sort the array

One way we could sort the array is to write a function.

Then we can pass it in and watch the magic happen.

This is the least efficient way to do it and arguably not the easiest to read either.

According to this the array can be sorted like so:

Because there is only one line in the body let us do ourselves a favor and put the closure in one line:

Since the type is given (String, String) -> Bool we can leave out the following:

So we could write:

Since we have only one line of body we can leave out the return statement:

The s1 and s2 in the previous examples were custom names for the arguments, but swift gives default names like: $0, $1, $2, $3.... This means that everything before in can be left out.

Operator functions like > and < happened to have the same type as the sorted(by:) method requires so we could just pass that in:

If the last parameter of the method expects a closure then you can leave out the name of the parameter and the closure and write it afterward in curly braces:

This is most useful when you want to write a bigger closure and writing it outside the parentheses is easier.

If the argument list consists only of the closure than the parentheses can be left out too:

Sometimes there is a confusion between the role of curly braces and parentheses and something like this can happen:

As a rule of thumb: when you pass in a function that is already written you don’t need {} but if you are writing the closure inline than you do it inside the {}.

So in the post, I started with the least efficient and longes way to solve the problem and worked my way to the optimal way to do it. My advice is that you use the last example in your code for closures as it strikes a good balance between readability and efficiency.

There is a website dedicated to explaining closures called fuckingswiftblocksyntax. This website is now outdated but it can still be useful. Official Apple documentation is also available on the topic.